THE CULTURE OF PEACE 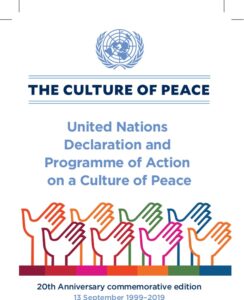 UNITED NATIONS HIGH LEVEL FORUM ON THE CULTURE OF PEACE

Backgrounder
On 13 September 1999, the United Nations General Assembly adopted, by consensus and without reservation, its landmark, pioneering and norm-setting resolution 53/243 on the Declaration and Programme of Action on a Culture of Peace. Among other things, it provided the driving force for the implementation of the UN-declared International Decade for Culture of Peace and Non-Violence for the Children of the World (2001-2010).

Ever since the initiative taken in 1997 to include a separate agenda item on the culture of peace by Ambassador Anwarul K. Chowdhury of Bangladesh and the UNGA decision to do so allocating the item to the plenary of the General Assembly, every year the Assembly has adopted by consensus a comprehensive, self-standing resolution on the culture of peace. The General Assembly, through its annual substantive resolutions, has highlighted the priority it attaches to the full and effective implementation of these visionary decisions which are universally applicable and is sought after by the vast majority of all peoples in every nation.

Recognizing the need for continual support to the further strengthening of the global movement to promote the Culture of Peace, as envisaged by the United Nations, particularly in the current global context, the day-long, General Assembly High Level Forum is intended to coincide with the anniversary date of the adoption of 53/243. Substantively, the Forum is to be an open public opportunity for the UN Member States, UN system entities, civil society including NGOs, media, private sector, and all others interested, to have an exchange of ideas and suggestions on the ways to build and promote the Culture of Peace and to highlight emerging trends that impact on the implementation process.
When we see what is happening around us, we realise the urgent need for promoting the culture of peace – peace through dialogue – peace through non-violence. The culture of peace begins with each one of us – unless we are ready to integrate peace and non-violence as part of our daily existence, we cannot expect our communities, our nations, our planet to be peaceful. We should be prepared and confident in resolving the challenges of our lives in a non-aggressive manner. This individual dimension is the core message of the culture of peace, more so in recent years, and can create the collective action for peace which the United Nations is aiming to achieve for more than the seven decades of its existence.

The Forum is convened by the UNGA President taking the lead in the preparations of the event which focuses on the implementation of the Programme of Action. Following the wide-ranging success of the UN General Assembly’s High Level Forum on The Culture of Peace held on 14 September 2012, the Assembly adopted by consensus the resolution 68/125, co-sponsored by 105 Member States led by Bangladesh. It requested “the President of the General Assembly to consider convening a high level forum, as appropriate and within existing resources, devoted to the implementation of the Programme of Action on the occasion of the anniversary of its adoption, on or around 13 September.”

The 73rd session of the UN General Assembly adopted the resolution 73/126 on 12 December 2018 – with the co-sponsorship of 100 Member States led by Bangladesh – which requested “the President of the General Assembly to give special attention to the appropriate and befitting observance of the twentieth anniversary of the adoption of the Declaration and Programme of Action, which falls on 13 September 2019, by holding the high-level forum on that date, which will be an opportunity for renewing the commitments to strengthen further the global movement for the culture of peace.

China’s Belt and Road Initiative (BRI): Is it a Benign Economic Plan or a Strategy to Dominate?

In the beginning of the current decade, China envisaged a grand strategy to become one of the dominant global actors. This is because, China’s sustained economic growth has helped it to recalibrate its foreign policy that is centred on three core interests: “National Sovereignty,” “National Security,” and “Territorial Integrity”. However, unlike other ‘great powers,’ it appeared to establish its reputation as a leader in the Non-Aligned Movement (NAM) and a champion of Third World interests. Nevertheless, such a hypothesis needs scrutiny in view of its launch of the BRI, also known as One Belt One Road or OBOR.
President Xi Jinping first outlined this multi-trillion-dollar initiative in a speech entitled, “Promote People-to-People Friendship and Create a Better Future,” at Kazakhstan’s Nazarbayev University in September of 2013. While the principal aim of this vision is to connect masses of Asians through trade, infrastructure, and culture, President Jinping also outlined a number of core ideas that BRI has focused among which cracking down on the ‘three evil forces’ of terrorism, extremism, and separatism, as well as drug trafficking, transnational organized crime was important. As a result, BRI has effectively connected more than 65 countries in Asia and 60% of the world’s population. This project has two broad components: the “belt,” which refers to the land portion of the silk route, or the Silk Road Economic Belt extending 4,000 miles from China to Europe through Central Asia; and the “road,” which refers to the Maritime Silk Road linking China to Southeast Asia, the Middle East, and Africa. Besides physical infrastructure, China plans to build 50 Special Economic Zones (SEZs) modelled after the Shenzhen Special Economic Zone. Of the five top recipients of BRI-related funding, the largest so far is the China-Pakistan Economic Corridor (CPEC) at an estimated USD 68 billion.
While China has embarked on such a massive project, a relative lack of interest about BRI is noticed amongst policymakers and researchers in the West largely due to the wave of protectionism and populism sweeping these nations. Further, the US withdrawal from various global forums affected ‘multilateralism’ in global affairs. In the meantime, almost quietly, China has established its physical presence in a number of littoral countries in the Indian Ocean Region (IOR) with an aim to influence international norms and institutions pertaining to trade and security. Nonetheless, there are significant geopolitical implications that need to be understood as the BRI has become China’s signature foreign policy tool.
First, China has emerged as the most important player in the geopolitical realm in Asia by outmanoeuvring others. It has become an important stakeholder in negotiating international conflicts (e.g. Rohingya crisis). Its standing in the ‘soft power’ has been steadily increasing since the launch of BRI. Second, China has started to control IOR by establishing its maritime listening posts near Myanmar, Sri Lanka, and Bangladesh coasts and deep-sea ports in the IOR. That virtually offers a free run in the region be it moving its energy or soldiers. Third, India’s role as a balancing power in Asia has largely been diminished. It occurred due to an unsustainable Japan-India economic coalition and domestic political turmoil in India. In addition, through one of the BRI projects in Pakistan’s Gwadar, China virtually has encircled India. Fourth, China has nearly achieved energy independence by overcoming its ‘Malacca dilemma’. Fifth, China’s rose to dominate the ASEAN nations that in turn undermines Canada’s role as a dialogue partner. Sixth, in 2017 China had proposed to expand BRI in North America by working closely together to form a China-Canada maritime energy corridor (Guangdong province and British Columbia). It also eyes to encourage interaction between each other’s development strategies, jointly contributing to economic success in the Asia Pacific.
Observers might surmise that Canada has no direct geopolitical interests in Asia as it only fulfils its obligation in terms of financial aids to some of the developing nations. However, CRRIC argues that Canada is at a crossroads now in terms of re-evaluating its engagement strategy with China. This is particularly important due to the ongoing stressful relationship with China that Canada endures because of the US. In sum, BRI demonstrates China’s near-total dominance in land and sea in Asia, which is expected to be further strengthened over the next decade. It is worth pondering that BRI is just a means to the ultimate goal in the creation of a China centric integrated region in the eastern hemisphere. Therefore, Canada needs to re-evaluate its ongoing acrimonious relationship with China, that might not be beneficial to its long term economic and geo-political wellbeing. To put things in perspective, while Canada-China relationship is at its nadir, American GE works closely with China Machinery Engineering Corporation (CMEC) to build a wind farm in Kipeto, Kenya. This highlights the importance of economic realism over inter-state diplomatic relationship.
In light of BRI and its potential impacts on Canada, CRRIC would like to propose a half-day seminar in September/(early) October 2020 with CIC. There might be a panel discussion with selected panellists followed by open discussion. It could be held in one of the Universities so that graduate students researching on China can take part in knowledge exchange. A publication following the seminar can also be planned.

CRRIC suggests to seek answers to the following questions in the seminar from the panellists:

[i] Some of the questions were adopted from the following website: https://www.canada.ca/en/security-intelligence-service/corporate/publications/china-and-the-age-of-strategic-rivalry/expanding-regional-ambitions-the-belt-and-road-initiative.html